The book jacket of The Last Woman Hanged: the terrible, true story of Louisa Collins 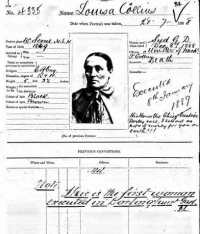 The official document nothing Louisa Collins’ execution by hanging

“Husbands, wives and arsenic. Turns out they go quite well together.” So lightly began Caroline Overington’s otherwise solemn and impassioned talk on her latest book, Last Woman Hanged: the Terrible True Story of Louisa Collins.

In it, Ms Overington narrates the story of Louisa Collins; twice-married, mother of 10 and notorious victim of capital punishment. Before being brutally hanged in Sydney in 1889, an all-male court tried Louisa a world record-breaking four times for the murders of her two husbands. She swore her innocence until the noose was taut.

And that’s not even the most astonishing part of Louisa’s story. Her execution triggered one of the first documented instances of public feminism in Australia, leading to groundbreaking female civic victories. “Less than 15 years after Louisa Collins was hanged, Australian women would become some of the first in the world to get the vote … less than 20 years later, Australian women were standing for Parliament,” Ms Overington told the Bitesize Lunchtime Talks crowd on Tuesday.

“A lovely little flirt,” Louisa was persuaded to marry at a young age. There, in “swampy, very foul smelling Botany, she fell in love. Unfortunately, it wasn’t with her husband,” Ms Overington jokes.

Soon after her husband discovered the liaison, he mysteriously died. Louisa almost immediately married her lover. Then he, too, abruptly fell ill and died, exhibiting the same pre-mortem symptoms. Overington recounts, “She sat by his bedside, wailing.”

An autopsy on the second husband revealed he had died from arsenic poisoning. Police promptly arrested Louisa and put her in jail. There, the Borgia of Botany, as the press labelled her, remained for two years, enduring four trials before her execution.

The evidence that led to her conviction and death sentence was merely circumstantial. Her “tiny little girl”, 10-year-old May, gave the most crucial testimony. “She told the judge that while dusting in the kitchen, she had found a box of Rough on Rats on the shelf. Rough on Rats was pure arsenic. Not that any box was ever found there.”

Surprisingly discovering volumes of primary source materials, Overington has brought to life the raw emotion of the trials. She quotes Louisa discovering her daughter’s trial testimony from her prison cell: “My only daughter, my heart and soul wrapped up in her. I saw her before my eyes made to take the stand in the witness box and say sufficient to send her own mother to the gallows.”

Ms Overington believes it was no accident that these records were kept. “They wanted us to find it,” she says, meaning the women of that generation, who were enraged by this “travesty of justice”.

“The big question is not whether she did it, but how they could do it,” she explains, ‘they’ being the all-male court system that convicted Louisa. In protesting her extraordinary four trials and the lack of evidence leading to her conviction and death sentence, “enormous numbers” of women fought for her right to live.

Some of these women “even took Louisa’s small daughter by the hand and marched all the way up to Government House and banged on the door, demanding an audience. But [the Governor] would not even come out to see them.”

Their thesis – that an all-male political and legal system, including jurors, could not fairly determine her death sentence. Ms Overington compares this situation to that of young conscripts in the Vietnam War: “They were considered old enough to die for their country, but not old enough to have a say in whether the war should be fought in the first place.”

Yet the female outrage over Louisa’s fate was also symbolic of a broader indignation about their plight. “Most women in New South Wales at the turn of that century lived in terrible poverty,” Ms Overington states bluntly. “And they could never escape, because women were barred from most of the professions. What jobs there were for women paid one-third the male wage. There was violence in their homes that they could not escape because divorce was so difficult to get and you lost your children. There were plenty of other inequities, including backyard abortions.”

Because of the backlash against Louisa’s death, as well as the female legislative triumphs that followed, Ms Overington describes her book as a “letter of profound thanks” to the women of that generation. “How do you think we got the vote? Because they sure as hell didn’t give it to us!”